After nearly half an earth-circumference of cycling, I had yet to sleep in a soggy sleeping bag. I had simply been lucky enough to avoid evening rain or to be in places where I could afford to dry out in a hotel.

That was not the case in these last few weeks. The state parks provide great camping options for cyclists, but they provide little shelter from the sheets of rain that constantly batter this section of coast.

That’s okay, though. I was heading home. For two years I’ve passed new sights and sounds almost every day, but now I began to recognize landmarks and landscapes. Even the cold rain, “the good rain”, as Pacific Northwest historian Timothy Egan calls it, had the scent of returning.

My route up the coast highway, from San Francisco to my hometown of Eugene.

I lived in this city for the first years of my life. We moved away when I was three, so I don’t have more than a few images from those years, but there’s something in the hills and the light and the windows that I remember.

California recently extended its fuel efficiency standards and its zero-emissions vehicle mandates. This comes as a thumb in the eye for the Trump administration, as it works to roll back the Obama administration’s progress on fuel efficiency. Twelve states and the District of Columbia, together representing 40 per cent of the nation’s car sales, follow California’s standards. While the Trump administration has reportedly looked into ways to revoke the waiver that allows California to set these standards, there is no legal precedent for such an action and proponents of the standards have promised stiff legal opposition.

Farm country along Highway 1, green after a year of rain.

Sunset on the Gualala River in northern California. 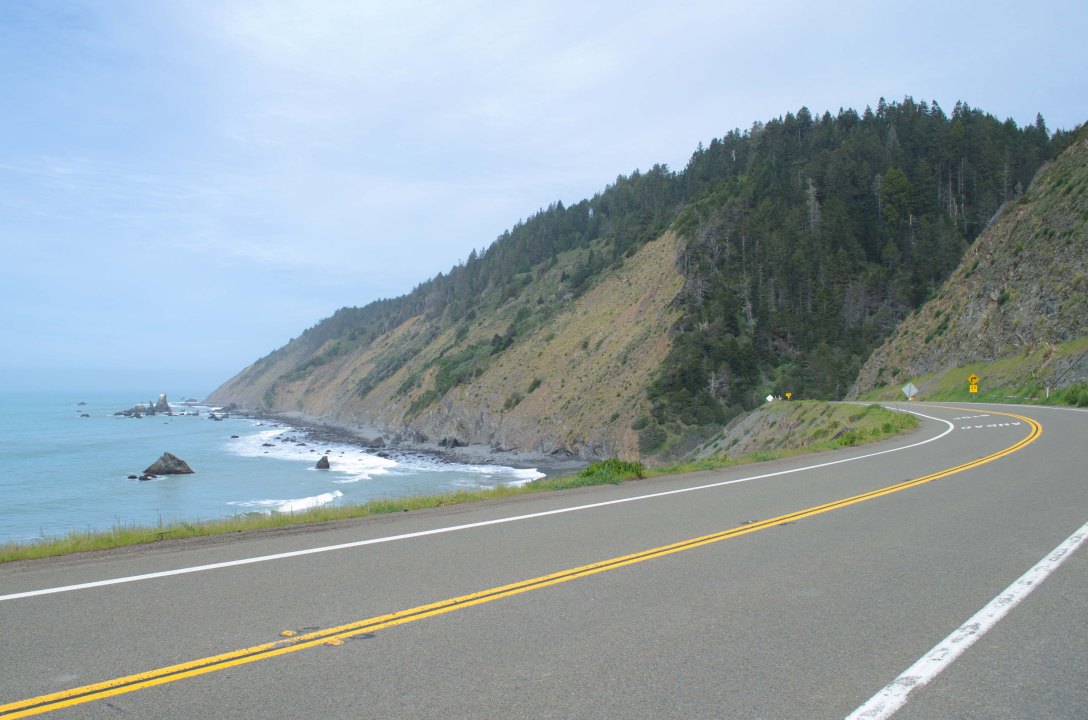 Here, highway 1 cuts up into the hills and away from the rocky coastline. This section of road was closed due to landslides, but they let me through on my bicycle, which made for a great day of car-free riding.

Spring flowers among the trees.

Cycling the Avenue of the Giants in Humboldt State Park.

A shaft of light among the redwoods. 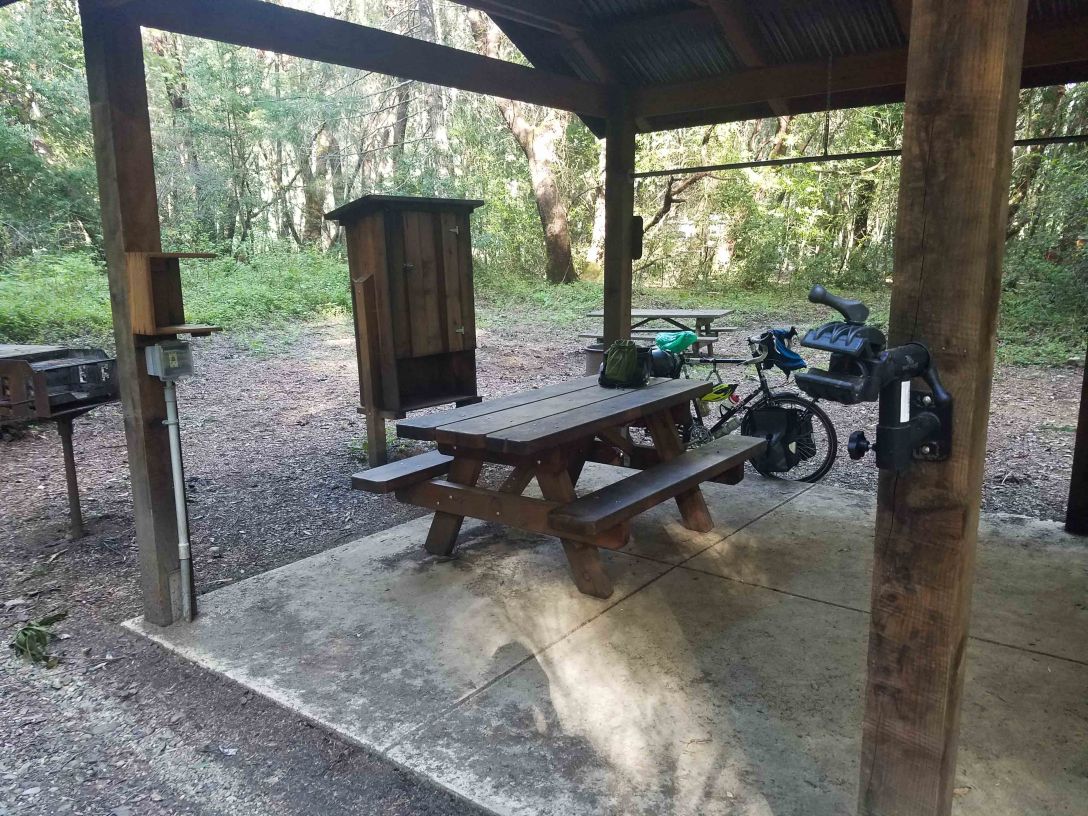 Every state and regional park on the way up the coast had sites set aside for people without motor vehicles: five dollars a night, first come first serve. This site even had a mechanic’s clamp and a charging station, a far cry from the stretches of Florida highway where my only options were RV parks that charged $30/night and often weren’t authorized to host tents. 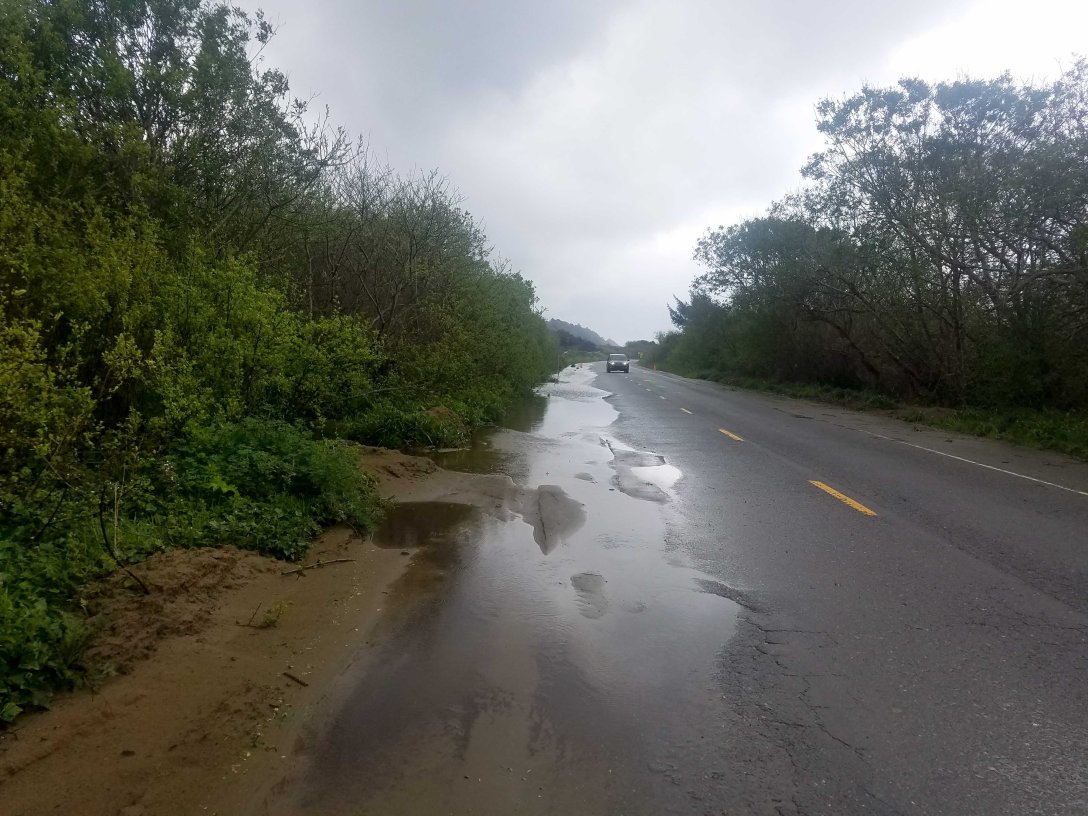 Just north of Eureka, this section of road was partially flooded by overflow from the nearby slough. One of the reasons that sea level rise is hard to talk about is that it can be so local. The geological fault that lies just off the western coast of America can cause the land itself to rise and fall, either exacerbating or mitigating the impact of sea level rise . Especially considering existing differences in local geography and how communities lie upon the land, the up-front impacts of rising seas can be counterintuitive and hard to understand in general terms. Nevertheless, a study released Monday in Nature Climate Change notes that the real impacts of sea level rise extend well beyond our coastlines and highlights the economic impacts of migration to inland cities.

Back to the home state after a year and a half!

The view south from Port Orford towards Humbug Mountain and the Redfish Rocks.

The Oregon Forest Research Institute says that clear-cutting in forests like this one “can be the most appropriate harvest method”, because douglas fir saplings need plenty of light to grow. They make no mention, however, of the potential climate consequences of the practice. A Dartmouth study from last year suggests that clear-cutting mobilizes soil-based carbon at a greater rate than selective logging, making it more likely to push that carbon into the atmosphere.

Land use changes have a significant role to play in climate change mitigation. In recent years, they have introduced about 5 gigatons per year of carbon into the atmosphere (compared to ~35 gigatons/year for all fossil fuel use and cement production), but they represent more than a quarter of historic carbon emissions, meaning that there could be room for land use change to remove a significant amount of carbon from the atmosphere.

Trying to put on a hat around mile 80 on my last day of riding. Hoping to avoid a soggy evening of camping in the coast range, I combined my last three days into two and finished with a wet day of 96 miles and 3,000 feet of climbing.

At the tax justice rally on April 15 in Eugene. With the upcoming big-ticket marches for Science and Climate Justice, around 300 people came out to demand a more equal tax code and the release of President Trump’s taxes.

My posts from here on are going to start slowing down for a while. I plan to do a loop through Oregon and Washington to look for jobs, attend my sister’s graduation and officially make it to halfway around the world.

Hopefully I’ll be back out on the road at some point for another long leg from Alaska to South America, but I’ll definitely be out there from time to time regardless, cycling towards my world circumference, writing and learning what I can about our world, its climate and our energy future.

2 thoughts on “Heading Home: 15 Photos from the Coast Highway”