My eyes open in a dark room. Boom. Pop popopop. Explosions outside my window.

I check my phone. It’s 5:03 am on national day, and the fireworks have started.

We head out for the day around 7:30. We cross the footbridge toward downtown, and enter a world of red and gold commotion. Red banners and red inflatable gates, (bought by proud relatives to commemorate major milestones: getting married, buying a house, or having a baby), red holiday sale booths, red firework boxes spent and left to smolder on the streets.

Dan and I are left a little quiet.

We stop by Betty’s Mom’s and Aunt’s shops on the way out of town–her parents, grandparents, and aunt and uncle all live on the same block in Zhangjiajie and share most meals and much of the rest of their lives. We spend most of the day out exploring the hills, away from the city and its festivities. When we get back, Betty’s mother is just starting on dinner, so we go out walking to a local reservoir. 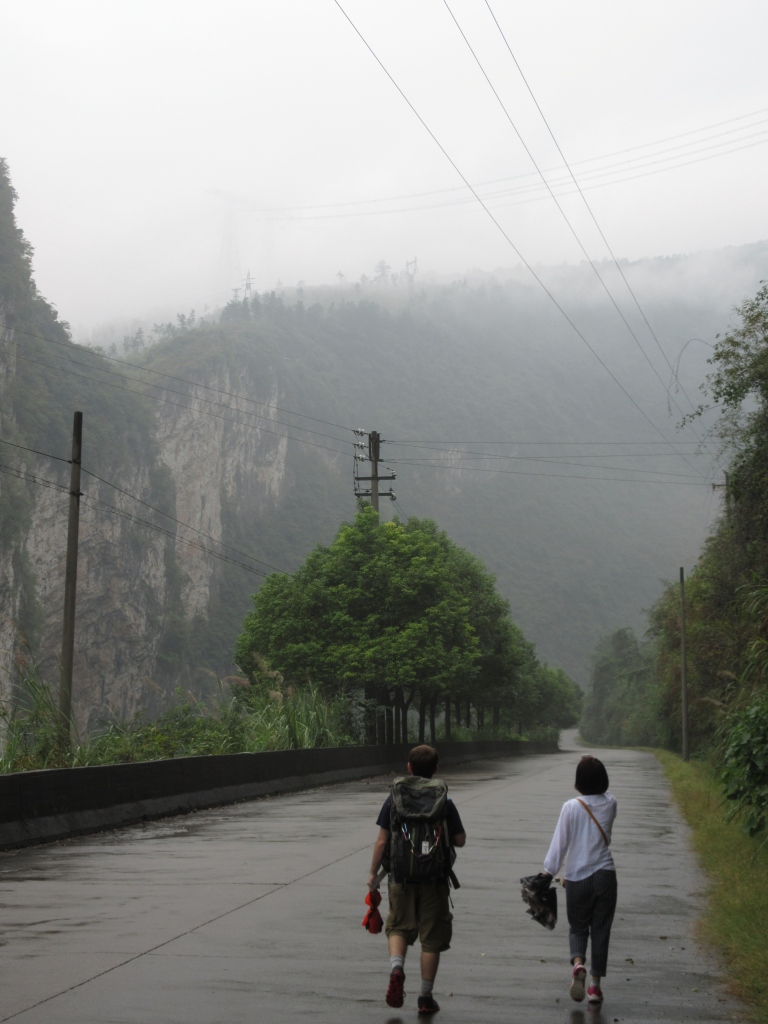 As we go, we (mostly Dan) sing American folk songs, Paul Simon, and other important American music (for Betty’s edification, of course). We stop for a moment to marvel at the engineering involved in putting power lines and roads across these hills, and Betty points up to one hill in particular. (conversation linearized for your convenience) “One time we were worried because my grandfather went to look for mushrooms there–rare mushrooms called 枞菌/cóngjùn that only grow for a few weeks [a year]–and it was night and he’s not back, and we we’re worried about him”

That makes sense, I think. He seems to be in his late sixties or early seventies, and to go out mushroom hunting by himself… he could have fallen, been trapped by cliffs, found some unfortunate local wildlife…

“There are many caves, and they might be covered by plants, so you can’t see, and then you can fall in…so we were worried. But he is okay, it was dark and he didn’t have light so he waited for the morning. My family went out looking and he came home the next morning.”

Why else? And without giving us any opportunity to politely decline, the hard won, grandfather-risked-his-life-for-these mushrooms are served at the next night’s dinner. Never in my life leading up to this moment have I been pleasantly surprised by a mushroom. These are phenomenal. The flavor is like nothing else I have ever tasted, rich but delicate, and without the normal hint of “these came from the ground.”

We finish out our stay with the most hospitable family on the planet, and we aren’t allowed to leave without four pomelos and eight oranges, each.

Humbled, that is what I am. Between stones reaching for the heavens and people who daily show each other, and me more often than any, an infinite kindness, I don’t suppose I could be anything else.