(Part 1 here) You stand and you stare…

And then the sounds come rushing in. People laugh, people talk, people pose for photographs (“qiézi”, “eggplant” is the Chinese version of “cheese”). There are horns in the distance, and five hundred feet climbing rough-cut stone steps. Vendors yell, children yell, everybody yells above the noise. Then, a passing exclamation at my strangeness, catching like a backpack strap on a door handle: “Hello!” “外国人!” (wàiguórén, foreigner), or ”很高了!“ (“hěngāole” “So tall!”).

This chaos comes down to three things. First, there are a lot of people in China. Like, a whole bunch. Everyone is everywhere, all of the time. It’s almost inescapable, and especially so at a national park on the national holiday.

Second, people now have enough money to take their family on vacation. It costs 245 RMB (~$40) for a 3-day pass to the national park, and hotels prices skyrocket around holiday weekends, but it seems like people can afford a vacation about now.

Third, the tourist infrastructure seems to have almost no checks on its development. The average mountain in Zhangjiajie Forest Park has ~3000 steps, and each step is made up of two 3’x6″x8″ (1m*15cm*20cm) solid stone blocks. Every path in the park is paved this way, which amounts to metric tons of stone and physical labor. Similarly, the Golden Dragon Cave, a 15km-long cave system with ~10 million-year-old stalagmites, has a paved path running through it, technicolor lights for all of its best stalagmites, and boasts “the longest man-made bridge in a cave in China.” China’s natural wonders are open to everyone who can pay admittance.

All this makes for a lot of people, and a lot of noise. I’m not here to pass judgement, so I won’t. Dan’s (the other foreign teacher’s) and my Western sensibilities were a bit offended by the commercialism and the damage to natural resources that seem inherent in this system. On the other hand, though, people of all stripes are outdoors getting their stair workout in and building a relationship with the world outside of the city. For now, for me, it’s better just to take notes and escape the crowds when I have my chance.

And escape we did. The last day of our trip, we opted to get the most out of our pass and explore some lesser-known areas of the park. Dan and I followed Betty, our student and gracious host, up one final peak. People faded away the farther we got from the main path. Then these started appearing:

Scattered, mossy, some of them shattered, large stone playing cards lay along the edge of the trail. Someone obviously put a significant amount of effort in to get them there, but why? I cannot say.

We walked through the lower part of 鹞子/yaozi village, past beehives (very close), across metal bridges (rustier and shorter of railing than would be entirely comfortable), and finally arrived at the top of the village. It filled every flat space on the top of the mountain, a collection of abandoned buildings and courtyards connected by grass-threatened stone paths. 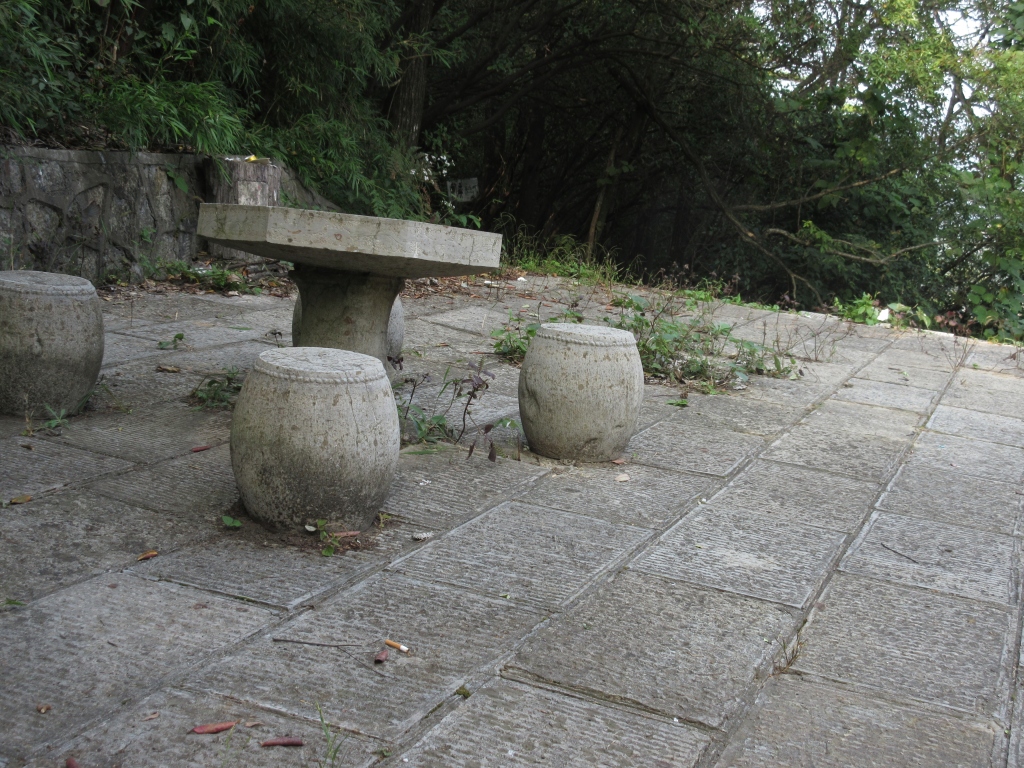 We were alone there, and we could see into every sector of the valley. Unlike everywhere else we had been, from here we didn’t look down over the edge of the valley. We were in the valley, looking out in every direction.

And the sound was different. It didn’t rush in. It didn’t rush anywhere. There were shouts from across the valley, but they were only echoes. The crickets, the bees, the birds, the wind, were louder. We were in the middle of everything. And the outside faded into the distance, for a moment.